Below the article written by Miria Buriani on Gazzetta di Modena, an Italian Newspaper.

At the Acetaia Sereni in Villabianca, on the hills of Marano, traditional balsamic vinegar of Modena is lived at 360 degrees, throughout the supply chain, from the vineyard for the production of grapes must to the table, with the dishes served by ‚farmhouse-Agriturismo. An innovative company projected into the future, but with solid foundations rooted in the past. It was grandmother Santina, entered by marriage to be part of the Sereni family, which began, like many Modenese housewife, to take care of the Acetaia.

Santina every year produced a few liters of balsamic vinegar that was used to season and give a particular flavor to the dishes consumed by the large family. Santina’s son, Attilio, a fruit trader, a fairly common laborer in the Cherry Valley, passionate about this particular product, started buying a few more barrels and continuing the family production of balsamic vinegar. Attilio obtained a small quantity of product each year, which served not only the family, but also to give to friends, colleagues and customers. It was in 1982 that Attilio’s son, Pier Luigi, realized the great potential of this Modena „black gold“ and began selling it first in Marano, then, in the early 2000s, on the Villabianca estate, on the Modena hills. Pier Luigi, with his wife Elisabetta, believed in the future of tradition. Now the sons Umberto, 25, who is mainly involved in receptivity, and Francesco, 23, who is mainly dedicated to export and product quality, have also entered the farm. To complete the family there is Federica, still small to enter the company, but with a bright future waiting for her.

The estate, about 25 hectares between Villabianca and Vignola, can count on an acetaia of over 1500 barrels of precious woods and exports balsamic vinegar all over the world. The land is mainly cultivated with vines for the production of traditional balsamic vinegar, but a part of the grapes is also transformed into Lambrusco. And then there are the olive trees: about 900 plants from which the company obtains a particularly intense oil, delicate and fruity at the same time, in the company mill. „We planted olive trees, but then there was a small natural selection and there are still a thousand initial plants – says Francesco Sereni – The olive grove is located in a small natural amphitheater, where the plants are less exposed to wind and frost. Last year we produced about one thousand liters of oil, of two types and the result of two collections, the first in September-October, the second later in October-November ». Two interesting oils: the first of which, the „Calancolle“, stronger, slightly bitter and spicy, entered the June ’19 edition of the Gambero Rosso magazine, included in the ranking entitled „7 Extra Virgin Extra Long Along the Boot“. „Our Calancolle is the only oil of northern Italy mentioned in the midst of illustrious Tuscan and southern oils – added Francesco – Finally Modena can be considered a production area not only of an excellent and unique Balsamic Vinegar, but also of Quality Extra Virgin Olive Oil „. In 2012 the Sereni company opened the agriturismo with about eighty seats and six modern rooms. „In the agritourism you can enjoy all that our farm produces,“ said Francesco, „including jams made from various cultivated fruits, vegetables from our garden, crescentine in tigelle and fried dumpling.“ The dishes are revisited in a modern key by our chefs, always keeping their roots in the Emilian culinary tradition. The raw materials that we do not produce directly we buy, after a careful selection, in the other farms of our territory. The wines come mainly from Emilia Romagna, from historic wine cellars in the area and selected by the Sereni family ». To learn more about the estate and its gastronomic excellences there are guided tours with visits to the vinegar factory, a small lunch or lunch: in this sector, the company is making new investments by enlarging the bottling room, creating a new tasting room on the panoramic terrace. 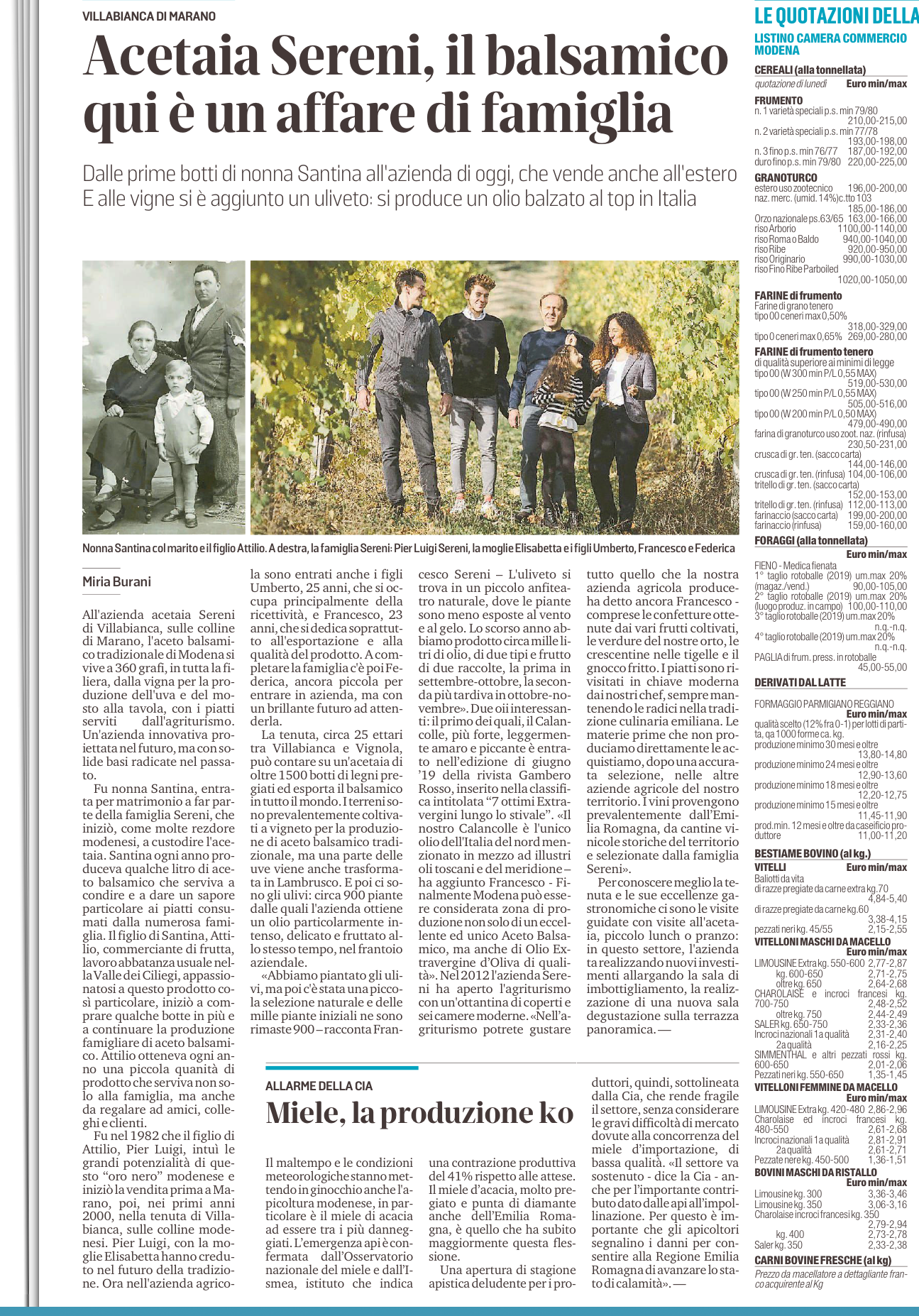