On National Geographic Traveler we talk about Balsamic Vinegar

The Autumn Issue of National Geographic Traveler is now on newsstands, and the topic is Traditional Balsamic Vinegar of Modena…

In Modena and its surroundings, among slopes caressed by vineyards, there is a condiment where the fruit of patience, dedication and healthy obsession connects one generation to another.

The Ghirlandina tower reminds me of a pencil on the first day of school with its perfectly tempered tip soaring toward the sky and coloring it pink. This is how Modena welcomes me, and in a moment, childhood memories of the Emillian countryside come to mind.

When the wind was right, my grandmother used to bring her forefinger to her mouth, inviting me to silence. “Listen to the red-car”, she said to me, referring to the Ferrari racing on the track in Maranello, just a few kilometers from us. The wind brought the roar of the engine, like the rustling of leaves.

In the pantry of her kitchen, there was always a bottle of vinegar; it was the good one from the farmer Geppino, who lived on the river coast with his dogs. He had a small barrel from which he took this black delight that filled my mouth with flavors and my nose with smells, impossible to replicate.

The land of fast cars and slow food, people say, and these two fleeting memories are more alive than ever to confirm it.

It is said that Enzo Ferrari refused to sit at the table of his favorite restaurant if Balsamic was missing.

The vinegar made by the producers in the province of Modena is the only one in the world that can boast the title, “Traditional”, as well as being protected by the Protected Designation of Origin (DOP) since 2000. To obtain this distinguished designation, the vinegar factory, vineyard, grapes and grape-juice must be certified by the Consortium for the Protection of Balsamic Vinegar of Modena which promotes the culture and dissemination of the product. (…)

Traditional Balsamic Vinegar of Modena must be at least 12 years old, and after 25 years it acquires the title of “Extravecchio” and it can only be placed in a special bottle designed by Giorgetto Giugiaro. All other vinegars are simply seasoning, and are packaged with the more common designation, P.G.I. Balsamic Vinegar (Protected Geographical Indication).

On the other hand, in Emilia Romagna culinary excellence has always been a rather serious affair: when a female daughter was born in Modena, it was customary for families to start a battery of barrels. Twenty-five years would mark the perfect maturation of both the woman and the Balsamic Vinegar: a custom that still exists today.

Balsamic Vinegar production is a bond of blood, I knew this as a child, and it is surprising to notice years later it is still like this: the condiment is like a thin thread that connects one generation to another.

Acetaia Sereni, one of the oldest in Modena.

Francesco, of Acetaia Sereni, taught me that! He welcomes me to the family farm, a hermitage of peace in the hills outside the city.

Here, where the traffic is a distant memory and the slopes are caressed by the vineyards, he tells me the barrels date back to the early twentieth century, when his great-grandmother Santina, a housewife always ready to offer a meal to passers-by, began to produce some Balsamic.

At the end of the 90’s, Francesco’s father Pier Luigi bought an old farm, turning it into an Acetaia.

I smile when Francesco tells me that when he was a child he used to go to school with a little bottle of Balsamic Vinegar in his backpack so he could use it on food for lunch: the vinegar was always part of him, and it was natural to turn it into a job.

Since Santina’s time the number of barrels have grown, reaching 1800 barrels to date. Seeing them all together is incredible: the sunset makes them shine and their curves seem like waves on a rough sea.

The emotions of the Acetaia

It is difficult to describe the smell of an Acetaia (vinegar factory), because each one has its own unique and non-replicable scent, which conjures different emotions and images. (…) 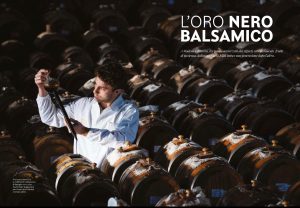 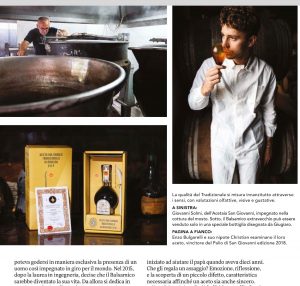 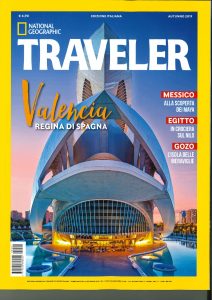